Henderson gatherings throughout the years 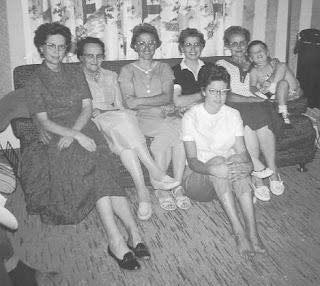 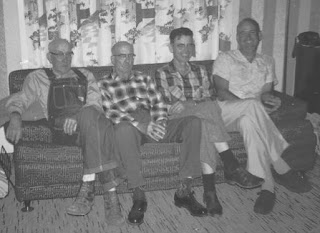 As I've collected family photos over the years, I think my favorites are the group shots -- mostly taken when members of our family gathered for meals or reunions. On the Henderson Reunion web site, I have various collections of these under different headings, but today I'll point you to the "Henderson gatherings throughout the years."

When you click through to the main page, the first photo you'll see is one of Marie, Iva (Marion's wife), Helen, June, Marsha, Gene and Ron. Everyone's smiling.

Compare that to the photo of Grandpa, Marion, Spud and Rip on this page. Spud and Rip seem to be having a good time, but Grandpa and Marion? No. This is why I love looking at these photos: It may or may not say something about the general disposition of the people being photographed -- maybe they just don't like having their pictures taken; I know I don't -- but it's fun to see the expressions on their faces, which tells us a little about the family dynamic sometimes.

The larger value, though, is that we have these images preserved for future generations. Many of the people in these photos are no longer with us. So, check 'em out. 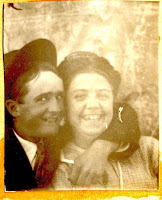 I'm going to need everyone's help with this one. These are photos contained in a little photo album dated 1910. Mom (Helen) found the book in a closet a year or so ago. I scanned all the photos and placed them on the Henderson Reunion Web site. My guess is most of these people are family (McIntoshes and Hendersons, etc.) and/or friends from the Burlington, Wyoming, area. Many were taken against the same backdrop -- a photographer must have come through town, and lots of people turned out to have their pictures taken.

My favorites of the lot of them are Grandma and Grandpa mugging for the camera (scroll down to #5). I have a hunch some others are Mary (Grandma) and her sister Roah, but I'm not sure. Aside from that, I don't know many of the others. They're numbered, so if you can identify any of them, e-mail me or call and let me know what names correspond with what photos.

Click on the "comments" button below, or e-mail me directly. 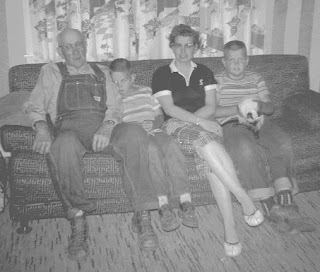 As I've slowly (and chaotically) pieced together the Henderson Reunion Web site, there are items that take us back 100, 150 or more years in our family's history. But also there are others that don't go back as far -- items that I remember. (I hope you'll excuse the personal nature of this blog entry, but it's going to mostly be told through my eyes, my memories.) When I was young, the things that I remember affecting me the most were family deaths and funerals. The first was my Aunt June's, and the next, three or four years later, was Grandpa Henderson's.

Those two probably hit me so hard because I was so young, and because I spent so much time with both of them. June and my mother, Helen, were pretty much inseparable -- at least that's the way it seemed to me. Not long after I was born, Mom, Dad and I lived for a couple of years on the farm with Grandpa, June, Neil and Crockett; Dad helped Grandpa run the place while Reanous was away serving a mission in Norway (ironically, where Dad had served his mission). I was too young then to remember a lot, except that Neil and Crockett hauled me with them a lot while playing around the farm. Grandpa and June just always seemed like they were part of our family unit, too.

I'm not sure as to the timing, but roughly the same time we moved off the farm to Greybull, June -- whose husband Neil (Sr.) had died just before Crockett was born -- remarried and lived on a farm up Shell Creek, only a few miles east of where we lived in Greybull. So we were always there, it seemed, or she was always at our place. During those early years of my life, she seemed like a second mother to me -- that's how much I loved her, since she always treated me so well, and since she and Mom were so close. She was also someone to be proud of in a public sense, since she held elective office in Big Horn County.

As for Grandpa, it was not until he retired from the farm -- after Reanous returned from his mission and married Merla -- that I got to know him very well. He would stay a while with Marie and Spud in Cody -- longer periods with them, I think -- and then stay a couple of weeks in Burlington, a couple of weeks with us in Basin (where we moved after my father became town marshal) and back up to Cody. Grandpa loved to tell stories, and I looked forward to sitting and listening to them. We watched the "CBS Evening News" (he would ask if it was time for the news, then declare, "I like to watch Cronkite"). He'd tell me stories about his youth -- riding his horse to Table Mountain outside of Burlington; as a boy in Idaho seeing Native Americans in their element, on what was left of the frontier; driving the stagecoach between Burlington and Meteetse -- and life in the Big Horn Basin (he was acquainted with, and didn't have a high opinion of, "Buffalo" Bill Cody.

Most of those stories are mere fragments in my brain now. And when he got the urge to walk to the grocery store to buy a sack of groceries, Mom would send me out on my bicycle to shadow him. Once in a while he'd get turned around and head off in the other direction after coming out of the store; I'd ride up to him, he'd figure out that if I was there, he must be confused, he'd be a little embarrassed, ask me which way was home, I'd tell him, then he'd bark at me to get lost because he didn't need any help from a kid. It was a ritual played out almost every time he stayed with us during the warm-weather months.

I loved them so much, and still do. Take a moment and see the pages devoted to Grandpa Henderson's and June's funerals. And, as always, please e-mail me or click on the comment link below to add your stories and memories of June and Grandpa.
Posted by Don at 10:05 PM No comments:

In last week’s post, about Soren Peter Guhl, I probably placed too much emphasis on his penchant for peculiarity. But I think the more we know about people, the more individual traits emerge, and the more their personalities become distinct. This is the thing I like best about looking back into our family history; as cousin Kathleen (Henderson) Wheeler once told me, referring to our Grandmother Mary Anne (McIntosh) Henderson: “I can’t wait to meet her” in the hereafter. Indeed.

I feel that way about many of my ancestors, not the least of which is William Buckminster Lindsay, Sr. Most of what I know about him comes via the Web site http://wardell-family.org/wb_lindsay_sr.htm. The original work was written by Rex B. Lindsay, and later “Edited and Expanded By: David J. Wardell (1990).” Some years back, I e-mailed David Wardell, and he gave me permission to copy and paste, with proper credit, the text onto the Henderson Reunion site.

Much of W.B. Lindsay Sr.’s life can be traced according to his membership in The Church of Jesus Christ of Latter-day Saints. (Good record keepers, we Mormons.) But the Wardells flesh out the story plenty from there. WBL was born in Vermont in 1797, one of 10 children in the family of Ephraim Lindsay and Mercy Willey. Interestingly, Ephraim was a Revolutionary War veteran. They moved to Canada while WBL was a child, and he later bought land there – the Wardells even identify the lot.

William Sr. married Sarah Myres, and they had eight children. According to the Wardells’ history:

In 1845, his son – and our great-greatgrandfather – William Buckminster Lindsay, Jr., married Julia Park – our great-greatgrandmother (she wrote a journal, which I have not read, but a copy may exist at the Daughters of Utah Pioneers Museum in Salt Lake City). I’ll save these two for a future blog posting.

I’m a little fuzzy on whether WBL Sr. and Sarah Myres Lindsay ever moved to Nauvoo, Illinois, where the largest body of the LDS Church membership had settled after being run out of Ohio and Missouri. It seems the family may have remained in Wisconsin during this. Eventually, though, by 1848, they made their way to Kanesville, Pottawattomie, Iowa. The Wardels report:

“The family members joined with the Captain John B. Walker Company for the trip across the plains. This company left Kanesville, 5 July 1852 and arrived in the Salt Lake Valley 3 October 1852. They traveled a distance of approximately 1,000 miles in three months. There were 250 people in the company. … William Buckminster Lindsay's wife, Sarah, died from cancer on 24 October 1852, within three weeks after the group arrived in the Salt Lake Valley from Iowa. She was ill before the family left Iowa but had urged them on so that she could be with the body of the saints before her death. The next year his daughter, Sarah, died in Kaysville or Centerville.”

The history, of course, continues until his death in December 1873. It’s an interesting story, and I hope you’ll take the time to read it: click here.