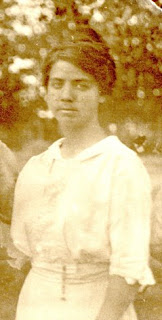 OK, I've posted the photo postcards on the Henderson Reunion Web site. Click here to go directly to the page. Please let me know if you recognize anyone else in the photos, and I'll add and/or update the captions.

There are many more photos -- I'm sure they include other family members. I'll try to post them in the coming weeks.

Please send along your comments, too.

No letters this week, but there's other good news

It's been another one of those weeks, and I didn't make time for reading through more of Grandma's letters. Sorry about that.

But here's what I dd do: My brother, Tony, and I have been helping my dad, Don, sort through long-packed items in a storage shed. Lots of these things we haven't sorted through since before we moved to Utah from Wyoming in 1973.

On Saturday, we found a box with a weathered old photo album containing postcards -- page after page of them from about, oh, 1905 to 1920 (roughly). This adds to the number I already have, about 150, that we located in a shoebox last year and that I've begun to feature on this Web page. They're all really great, with lots and lots from Grandma's McIntosh siblings, cousins and friends.

While that's cool enough, among the postcards in the book are a number of photo postcards -- apparently it was popular during that era to take photos, then have them made into postcards you could mail to friends and family. Among these picture postcards are several of Grandma that I'd never seen before. So, as soon as I can get around to it, I'll scan them and post them on the Web site -- I'll announce the postings here.

I sort of skimmed the writing on the backs of the cards as I was removing them from the haggard old book, and was hoping for our version of the Holy Grail: Maybe one from Grandpa to Grandma. I didn't see one, but that doesn't mean one isn't there. I'll look more closely in the weeks and/or months to come.

I'll let you know if we uncover any more treasures as we dig through the storage shed in the weeks to come. This one was completely unexpected.

I should also add that my mother, Helen, let me borrow her copy of "Sagebrush and Roses," the thorough history of Otto and Burlington, Wyo., written by Carla Neves Loveland. I'm about 200 pages into it, and it's a lot of fun to read. There is at least one photo of mother and her siblings that I've never seen before -- I'll post it here sometime soon -- and plenty of Old West intrigue: Like the time Ira McIntosh -- brother of Mary and Roah -- watched a man get shot in the back and killed outside the Garland Hotel over some dispute; our Great-Grandmother Nancy Lena Guhl McIntosh forbade him from testifying after the killer(s) threatened his life.

After weeks of letting everything get in the way, I’m back to Grandma’s letters. Let’s pick up where we left off, In September 1916.

In the Sept. 3 letter, she writes of her sister, Roah, bringing her a gift – a signet ring. But, she notes that while she’s “quite proud of” this ring, “I don’t like it like I do my other one.”

I’m wondering: Is she referring to an engagement ring? Had Dave, by this time, given her a ring? Are they engaged? I ask because none of the previous letters ever mentions it. Do any of you know?

Her Sept. 7 letter is a gentle scolding to Grandpa for not writing letters often enough.

I have to admit I get a special kick out of her Sept. 10 letter, since she might as well be writing about her grandson Don:

“I’m getting disgusted with myself when I go to church. I can’t stay awake any more. I nearly bobbed my head off this morning.”

Later in the letter, she makes reference to someone who may be a rival – or not, maybe she’s not worried, but simply teasing:

“And I’m not much afraid of those Alabama school marms, either. I don’t believe she’ll look as good to you as some other people do. I hope not, anyway.”

I’ve said before that I really like these little tidbits of information about daily life that she drops into her letters. In the Sept. 17 letter, for example, she mentions she doesn’t want to travel to Lovell to a church conference because the car in which she’ll be riding is unreliable – it gets stuck and the headlights don’t always work. (Sounds like some of the automobiles I’ve owned over the years.) Also, and this is probably just because I grew up in Basin, Wyo., I like this paragraph:

“Ira and Uncle are going to Basin in the morning to get some coal and take in part of the fair.”

I like the detail that reminds us they had to use coal for heat – if you haven’t read Rip’s recollection of his youth, you should – and appreciate mention of the county fair, since that was always the high point of our year as children in Basin, with rides, exhibitions, a rodeo, games and many, many more opportunities for mischief.

Grandma also makes another mention of the “school marm” she referred to in the previous letter:

“I’m awfully glad that school marm didn’t come. I was a little bit afraid she’d beat my time but now I can rest easy. I don’t believe anyone is going to take my place, tho. They’d better not, anyway.”

It must have been another woman who was supposed to teach school there, but who never showed up. That’s just a guess, anyway. Still, it was enough to give Grandma the jitters.

The Sept. 21 letter offers quite a few more details about attractions at the fair and life in Basin during the celebration.

I got a bit of a surprise reading the Sept. 25 letter. Grandma writes of seeing a famous political figure:

“Saturday afternoon we left convention [in Lovell, I think] and went down to the
train and listened for five minutes to William Jennings Bryan. He is sure a homely old scout. Bro. Kirkham said what he admired about Bryan was that after every defeat, he came up smiling.”

That’s all for this week. Next week we’ll wade into October, at least, and maybe beyond.
Posted by Don at 8:20 AM No comments:

Sorry I haven't posted since a couple of weeks ago. Been a hectic life the past little while. Things are settling down, a little, but since I'll be out of town most of next week, too, I may not resume posting for another week or so.